Panorama on the lagoon of Viacha
the mirror tho.

Viacha is a mountain community above Pisac, in the Sacred Valley of the Incas. Finally it has come my moment to go there. I heard about Viacha by my friend Hernan, because he is from there and because several times he has taken some foreigners to know the lagoon if that place. As you can imagine, I’m writing about a very magical place and very important in the Andean knowledge.

So, finally, it came my turn and I have been the organizer.

The meeting point was at 8.20, in front of Pisac market. As I was the organizer, I came some minutes before. Slowly, all the participants came: Stefan from Austria, Simon from Germany, Or from Israel, Laerke from Denmark and two more friends of her. It was 7 of us, plus Don Hernan, Dona Felicita and the driver. This is how the 10 sits of the van were all occupied, we had to leave in the village 4 Swiss people, because more people than expected showed up.

It was 9 a.m. when our van started our drive in direction to Intihuatana. Intihuatana is an ancient archeological site, something like the local Macchu Picchu, right above Pisac. But we were going much more far away and much higher than Intihuatana. Pisac is 3000 meters above the sea level, we raised to 4300 meters in 1h 30 minutes. The sky was always bluer and it was always colder. At a certain point the road was unpaved, but the more we were entering into the Andes, the more the panorama was spectacular. The Intihuatana was already very far away from us. Once we got to Viacha we found 4 houses spared in the mountain, 2 brown donkeys, a dog, many sheep, birds singing and lot of peace. Hernan stopped to get some woods in order to make a fire for us, while some of us were taking pictures with the donkeys. 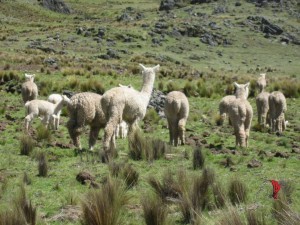 Fluffy white alpacas running in front of us 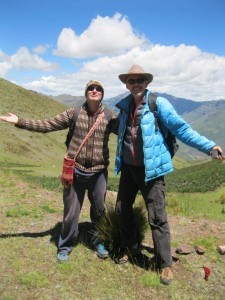 Again on the road, there was many curves, an eagle in front of us, as to give us his welcome, than another eagle, staying on a stone, on one of the curves, as a sentinel coming to check who we are, than many white alpacas running in front of us. Avelino, our driver, therefore stopped the car, so we could run behind those so beautiful animals that look like white wool running up those amazing green mountains. We don’t make it to run behind them, they are used to the few oxygen available on such altitude, we are not.

Maybe from the big effort, maybe because it simply had to be so, I needed to chew coca leaves, I was starting to feel the altitude and I had headache and nausea. The thing is we were already on 400 meters and here there is approximately 40% less oxygen. Or is very good at making massage, so he massaged particular points on my hands, while Felicita gave me the coca leaves to chew and Hernan gave me alcohol to inspire.

Some more curves and we finally made it, in front of us there was a mirror of transparent water, at the feet’s of the holy mountain of the place. Exclamations of enthusiasm were very present.

So we walked towards one direction, where we had the blessing to take part to a ritual of connection to the mountains. Local people call mountains Apus and they say they have life, they are like deities, with whom it is important to establish a communication, especially when you have the blessings to be hosted in those lands. So we called the Apus to join us in our journey and we did some more things.

Once the ceremony was over, some of us walked a little bit around, while others simply lied on the grass enjoying the sun. In the meantime, the group of alpacas we met before, came up to the lagoon. It was 26 alpacas, some adults, some babies, but all wonderfully white.

Quite in a short time we were all very hungry and we were very thankful to Hernan’s mother who got us to her home, in Viacha, for a delicious quinoa soup. Yes, we ate it all, some of us, more than one dish of soup each.

Than it was time to go back to the Valley, all happy, all shiny, all thanking me for having organized the trip. Me too I was happy, because they were so and I am inspired to organize the next trip.

At 3.30 we were back in Pisac, but it seemed to me as if we were back after many days to our homes. The feeling is that we have been somewhere out of the normal timeline and I’ m sure it is not only my feeling. 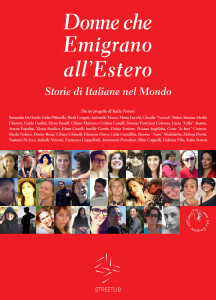 Lavorare nel Cinema a Hollywood! Where the dreams come true!